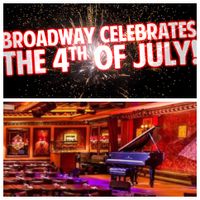 “Broadway Celebrates the 4th of July!”

It’s America’s birthday! We will sing of its beauty, we will sing of its promise, and we will sing of its struggles. You’ll hear the music of Broadway, Hollywood, Nashville, Motown, and more — all of it honoring the meaning of America, and all of them famous songs! From “America, The Beautiful” to “Buddy, Can You Spare a Dime?,” and from Richie Havens’ “Freedom,” to “Molasses to Rum” from 1776. You’ll hear songs like Johnny Horton’s “The Battle of New Orleans,” Barry McGuire’s “Eve of Destruction,” and Frank Sinatra’s hit “The House I Live In” (the song that put him in Dutch with the House Un-American Activities Committee).

The show is a pure Americana – of every kind! Because America belongs to all of us.

So, on Independence Day, come join a wildly talented cast of Broadway and nightclub stars light up the night sky with the most famous, beloved, and stirring songs about this ongoing, heroic American Experiment called The United States.