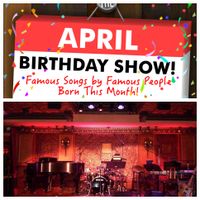 What do Billie Holiday, Glenn Campbell, Duke Ellington, Barbra Streisand, Roy Orbison, Ella Fitzgerald, Loretta Lynn, and Dusty Springfield all have in common? They were all born in April! This unique concert event will feature the songs made famous by these iconic Broadway, Hollywood and Recording stars who were born in the month of April. And not just them: Doris Day, Willie Nelson, Henry Mancini, Kelly Clarkson, Peter Frampton, and more were also born in April!

And if you were born in April, we’re going to celebrate you, too! The April Birthday Show is where you will hear Famous Songs by Famous People Who Were Born This Month! And all in honor of your Birthday!

This is the show where great music will be performed by wildly talented Broadway and nightclub stars, handpicked by the creator, writer, director, and host of the show, NYC impresario, Scott Siegel. He has created more than 400 major concert events all over the world, including producing, writing, and directing shows for Michael Feinstein. Siegel is perhaps best known as the creator, writer, director, and host of Town Hall’s signature series, Broadway by the Year.